Social Innovation inserted into the curricula of the Latin-American Universities

Students4Change, funded by the Erasmus+ Program under its Key Action 2, after three years of research, learning, experimentation and networking comes to its end.

The Students4Change project begun its activities on October 2016 with the aim of developing competencies and skills for social innovation and entrepreneurship, as a section of the curricula plan of the Latin American universities. At this moment, after these three years it can be said that the target has been reached and that social innovation is more alive today than ever before in the academic context of Latin American universities. Some milestones of the project are provided below: 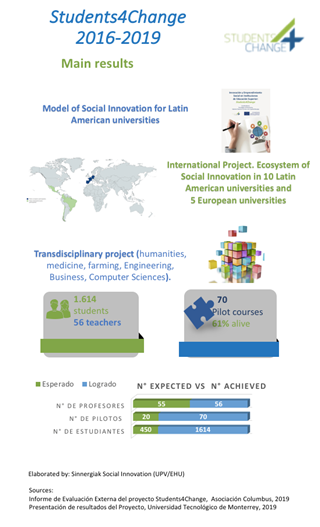 Developing a new model that promotes competencies for social innovation and entrepreneurship.

Design of a set of tools to learn how to develop skills and competencies on social innovation through detecting the needs of the communities.

An APP to connect projects and actors of the international level.

The design of a monitoring and evaluation system for learning courses.

Impact in the curricula plans of the universities to foster a culture of social innovation .

If you are interested in knowing more about this project you can consult the materials, deliverables and tools developed by Students4Change in the following web-pages: Sinnergiak Social Innovation https://sinnergiak.org/2016/01/02/erasmus-plus-students4change/  or Students4Change webpage: https://www.uestudents4change.org/