On December 13th, Sinnergiak Social Innovation (UPV/EHU) organized the transformative research session “Youth, employment and precarious work”, in the framework of the European project Social Innovation Communities (SIC).  Politikon attended the session, a platform formed by a group of academics and independent professionals, whose objective is to look at the reality from an analytical perspective and make proposals on social progress. 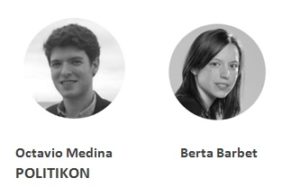 During the session, Sinnergiak interviewed Octavio Medina and Berta Barbet, editors and researchers from Politikon, about the current and future challenges for improving the interaction between transformative research and the development of innovative public policies.

Sinnergiak (S): We have attended a session where we talked about the current relationship between transformative research and public policy design, from a very specific point of view: youth and employment. According to you, which are the current weaknesses for a proper interaction between public policy research and design?

Politikon (P): there are two key questions. The first is language. The language used by the research is appropriate for academia, for disseminating among universities, but it is very different from the language used in public administrations or the people designing public policies. There are difficulties to use the same language, in order to bridge the gap between academia and the administration. The second factor is timing. For example, when evaluating public policies, the planning is made in advance, even before the policy is implemented, but results are obtained after three, four, or five years. Whereby decision making in politics and administration is much more urgent, it is hard for the timings to be parallel and compatible.

The main problem is that both fields are developed with very different languages and dynamics. Little work has been done in developing more productive dynamics that will facilitate a more fluid dialogue. Research has its timings and its criteria; certain subjects are researched, which do not fully fit into the real world when application is attempted. We have seen some examples during the session, the idea of resistance and certain ways of working that are incompatible with other dynamics. New spaces should be created where different languages and behaviors could be developed.

S: Which elements could improve or make this interaction successful?

P: Building bridges between the two worlds. The idea of creating forums. Clearly, there are a lot of forums where policy makers and researchers get together and talk about their problems, but the problem might be the lack of continuity of those dialogues. In the USA and other countries there are examples of cases where central government researchers perform research tasks inside the administration. That is how, instead of creating occasional forums where people meet and talk for a day, spaces are created for continuous collaboration.

On the other hand, research should be more involved in day-to-day policy design. Occasionally, the work routine changes and this should be considered in its design. Spaces should be created where policy makers and implementers can escape from everyday pressures and have some time to innovate and come up with new ways of operating.

S: Finally, what are the next steps to improve this interaction?

The idea of creating permanent spaces for dialogue and collaboration is one of them. The role of media and blogs is also important. The need to translate academic knowledge to accessible language, patters and spaces for the entire population. Analyzing an academic paper and establishing its implications for the real world, for Spanish public policies, Basque or from anywhere.

Spaces, such as this kind of sessions, where both fields meet, discuss, explain their ideas, exchange problems with each other. This is a helpful first step; they need to be more common and above all, more generalized.

Politikon is the common project of a group of independent academics and professionals that came together in 2010 in order to promote discussions and policies based on the knowledge on social sciences. It is a meeting point between academia, media and citizens and a center for the promotion of public policies. Politikon, which is formally constituted as an association, is independent and nonpartisan, and it is not linked to any political, academic, business or labor institution.

Group of academics and independent professionals