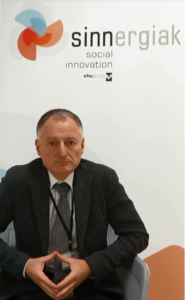 In the framework of the European project Social Innovation Communities (SIC), Sinnergiak Social Innovation (UPV/EHU) organized the Transformative Research session “Youth, employment and precarious work” on December 13rd. The objective of this session was to generate a space for the exchange of information and knowledge between the academic and research field, the public sector and the Youth -as a target audience with the aim at giving answers to the challenge on how research and practice interact to increase / improve the social and scientific impact in the field of problems linked to the future of youth employment and job insecurity.

Sinnergiak talked to Paolo Rosso, analyst of policies at OECD LEED in Trento about the great challenges to facilitate interaction between research and the development of public policies.

Sinnergiak (S) Could you tell us about the topics that are being developed by the LEED Center of the OECD in Trento regarding social innovation?

– Paolo Rosso (P.R.): The Trento Center is an integral part of an management unit based in Paris, with who we are working on social innovation issues. So, in the Center in Trento, on one hand, by working on issues for capacity building,  and on the other hand, and by implementing policies and effects at local level, we are supplementing the activities on social innovation that are already being developed in Paris. There is a very continuous synergy between the team that works on social innovation in Paris and us. In Paris, general frameworks are conceived, that is the policies more generally. While we, at the Center level, work more in the generation of capacities, where social innovation projects are undertaken. We focus on the exchange of practices and experiences on social innovation, as well as on the evaluation of the impacts, where some activities and actions are being carried out by the public sector. We work at local and regional level.

S: What are, in your perspective, the barriers for the development of social innovations at local level?

P.R.: The thing is that, from the experiences that we have seen especially at the local levels, the culture of public administration has a strong resistance to change. Social innovation is perceived as a factor of change that normally, almost intrinsically, does not encourage it, but on the contrary, it is an obstacle for social innovation. It is something that is significantly related to the organization itself, to the way in which the public administration is conceived at a local level and to the capacities of the people, that is to say, that the civil servants in the local administrations do not see themselves as potential drivers of social innovation, on the contrary, they envisage social innovation as a factor of change of the territory that weakens its own function.

S: We have just participated in a session about the relationship between the transformative research and the design of public policies. From your opinion and from the vision of the OECD, what are the weaknesses of this interaction?

P.R.: Well, the research requires a comprehensive vision, and capabilities in this interaction depend a lot on this fact. The problems should be addressed in an integral manner. Public administration, traditionally, has a separate sectorial vision. The different units, departments in the public sector work independently and the coordination between them is very weak. In this sense, the utility of the research to act effectively requires a capacity, an openness as well as an availability to change the paradigm and it is here where the conflict appears.

S: And what is the basis behind of this new paradigm?

P.R.: It is based on a change in the logic with which work is carried out, where the focus is on the solution of problems. These are systemic problems that require a more integral vision among the different functions of the public administration. The resistance of the public administration does happen both,  in compliance with its own procedure, and in the resistance to incorporate a more integrated projects-oriented vision.

S: Which are the necessary elements for the relationship between Research and Policy to be successful?

P.R.: From the practical point of view in the future, I think that a window to experimentation (trials and pilots) and small-scale work should open. In many cases, this allows, in small cases, to show that a change in the way of conceiving public administration can be marked. Then, of course, more systematization is needed. So that, these pilots, that do not face big resistances, gradually shape public policy.

S: Finally, what would be the next steps or recommendations that the OECD offers to make this interaction possible?

P.R.: As a LEED Trento Center due to the fact that we work on the implementation of policies at the local level, we are just searching for case studies in order to make comparisons. So that, what we can support with in this dynamic of change, it is to benchmark different experiences in different countries and put it side by side to see which the factors are: Where did they work?, where did they fail ?,  where are the key elements?  And this, in order to move forward, and promoting a change that can effectively materialize. There are many cases where this is already being done. There are favorable conditions in some territorial, regional or local administrations where it has been possible to promote. So, it is an empirical work by us as a Trento Center, based on practice and exchange. Another element that helps is the generation of capabilities, individual capacities, of public servants to receive workshops, seminars. Different means to improve and strengthen the capacities of public officials, of public decision-makers. Training at institutional level, to strengthen a different way of thinking about how to organize public administration at the local level, as well.  It costs more but sometimes we manage to do it. Those are the stages, the steps. Working on the people in order to induce the change in the core of the institutions.

The OECD Programme on Local Economic and Employment Development (LEED) has advised governments and communities since 1982 on how to respond to economic change and tackle complex problems in a fast-changing world. Its mission is to contribute to the creation of more and better quality jobs through more effective policy implementation, innovative practices, stronger capacities and integrated strategies at the local level. LEED draws on a comparative analysis of experience from the five continents in fostering economic growth, employment and inclusion.

ANALIST OF POLICIES AT THE OECD LEED PROGRAM IN TRENTO